On Beitostølen, 900 meters above sea level and with beautiful views of the mountain and the very popular top tour destination, Bitihorn, lies the cabin of Cecilie Hesselberg and Gunnar Sørum. Even though the cold winter is on, it has nothing to say about the warm and cozy cabin atmosphere that meets us on our way into this beautiful cabin. Like the mountain views, they have also chosen Vyrk’s own stain color, Bitihorn, to decorate the cabin inside for a warm and beautiful brown tone. 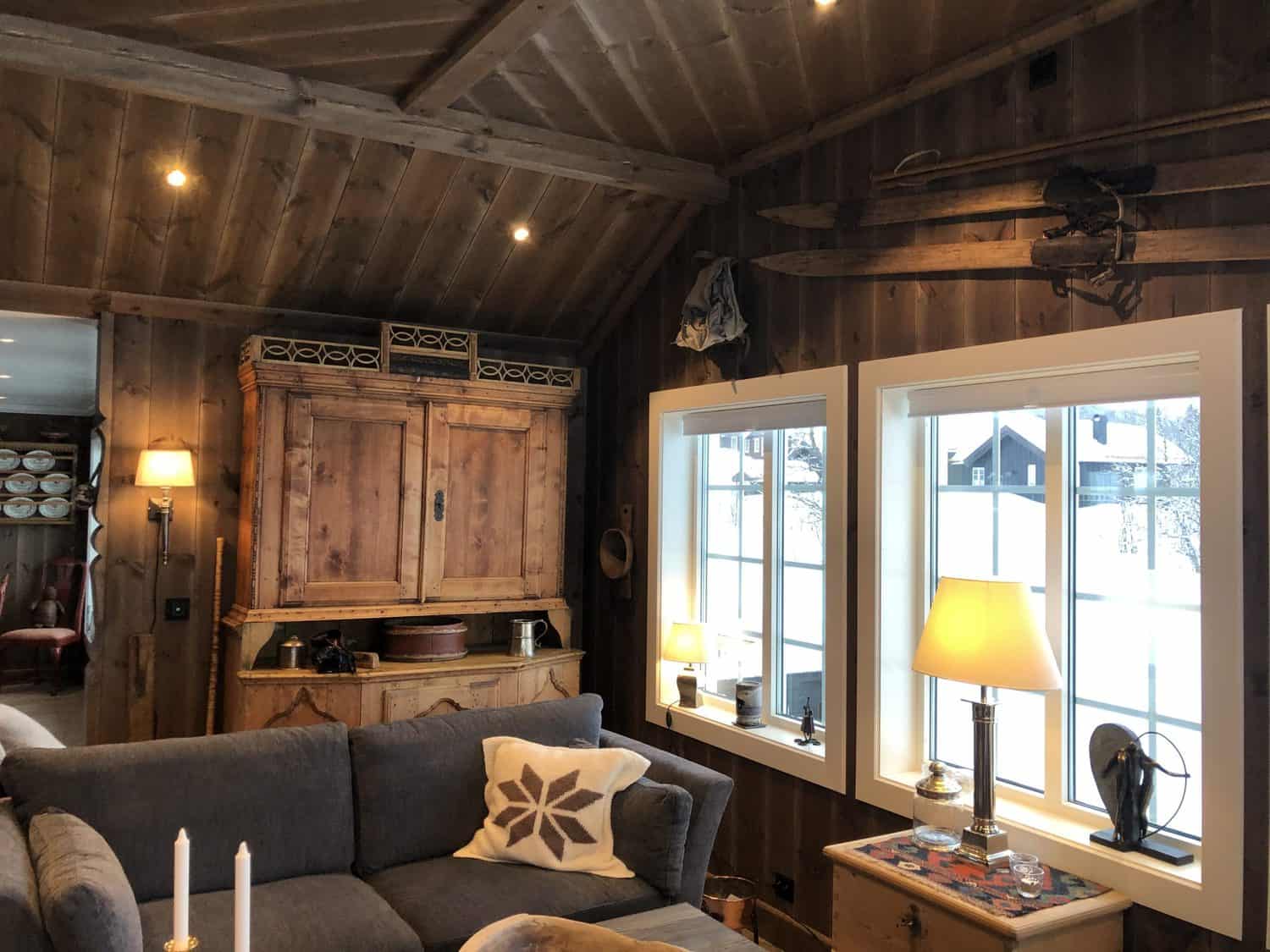 The cabin was built in 2019 by Eikås Hytter og Hus, and is a so-called H-model. Nevertheless, Cecilie and Gunnar have been involved in the planning from the beginning and therefore chose to change the model from Eikås. The cabin is built in a slightly quieter area, with little traffic, a little away from the very center of Beitostølen. When they chose to build a new cabin, they brought with them many great tips and experiences from the old cabin, and are very pleased.

-Everything comes out more in this cabin here, and we have many open solutions and rooms, says Cecilie.

The ground floor contains a kitchen and living room in one, master bedroom with bathroom, guest bathroom and separate TV room, as well as storage / laundry room. On the second floor there is a separate loft room, two bedrooms and WC. All floors, up and down are laid with oak parquet from QuickStep at Vyrk. The open solution is evident in the kitchen and living room. They nevertheless chose to separate some of these two rooms from each other by using stained ceilings in the living room and white painted ceilings in the kitchen in the color Cotton. The couple is also very pleased with the color choices they have made at the cabin. They wanted a warm and nice brown tone, so the choice fell on Bitihorn. It may not be a coincidence either, when the main view in the living room window is aimed directly at the magnificent mountain on Beitostølen. 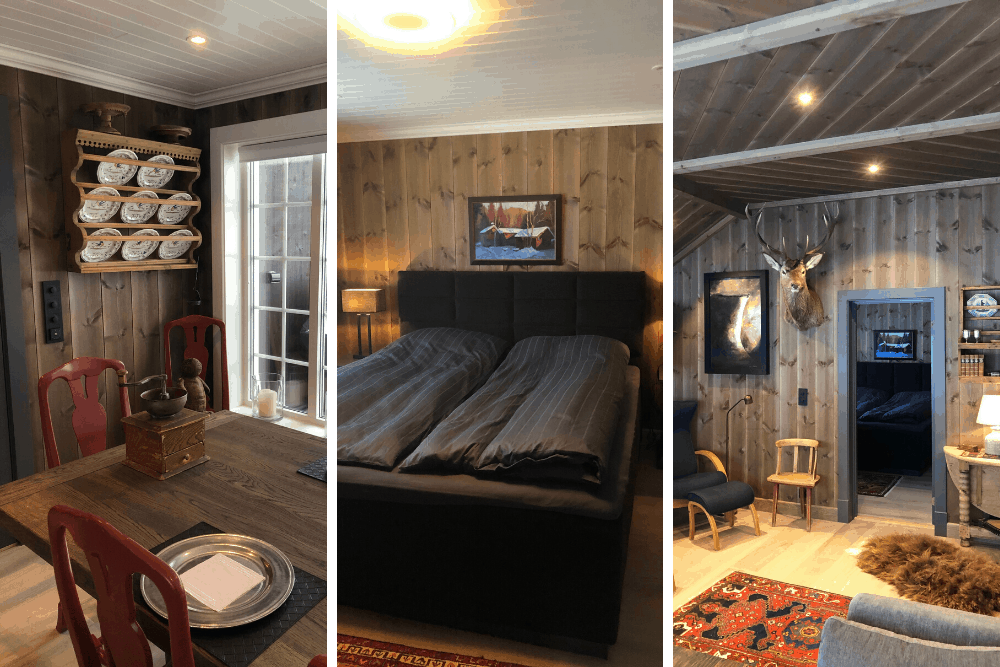 The roof of the cabin is a special roof that Cecilie and Gunnar took inspiration from when they were at the viewing cabin of Eikås Hytter and Hus on Hellerudsletta. The stained ceiling creates a distinctive character and gives an incredibly cool finish to the room. They have also used some old items and like to combine much of the old with the new. The couple can also tell that something particularly minimalist style, they probably do not have. The colors and details used in the cabin are warm and the expression gives a warm and cozy feeling. 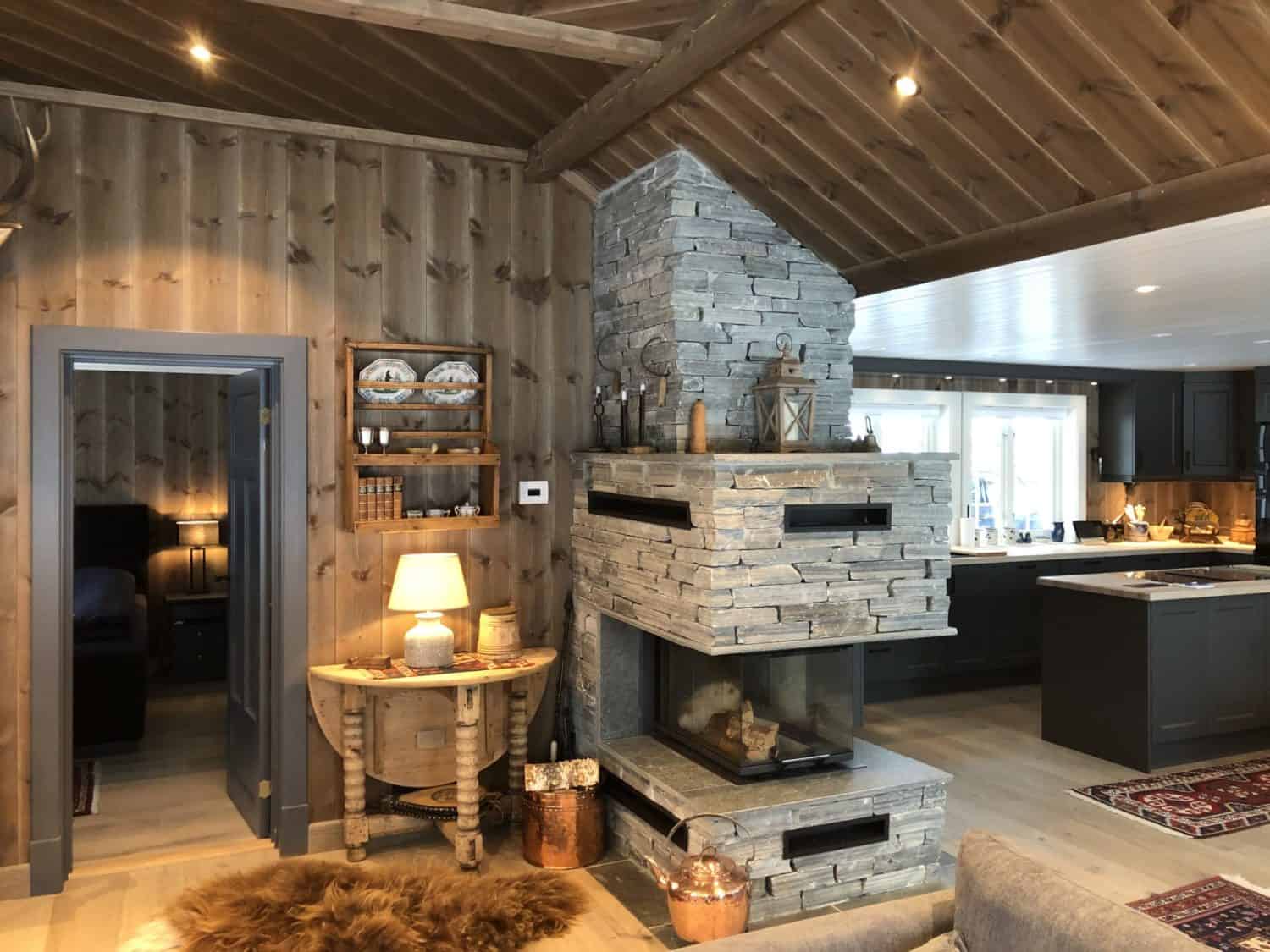 All panels, both exterior and interior, as well as moldings are supplied by Vyrk. In Cecilie’s favorite room which is the kitchen / living room a wide smooth panel is used, while in the other smaller rooms a narrower smooth panel is used. They wanted to separate the rooms a bit, at the same time as they didn’t think it would matter to use a wider panel in rooms that have such a good size. The hallway, on the other hand, has a slightly different character, and after visiting the exhibition at Vyrk in Rogne, they fell for the Skjåk panel. One type of panel they felt fit very well considering the style they would run in the cabin. 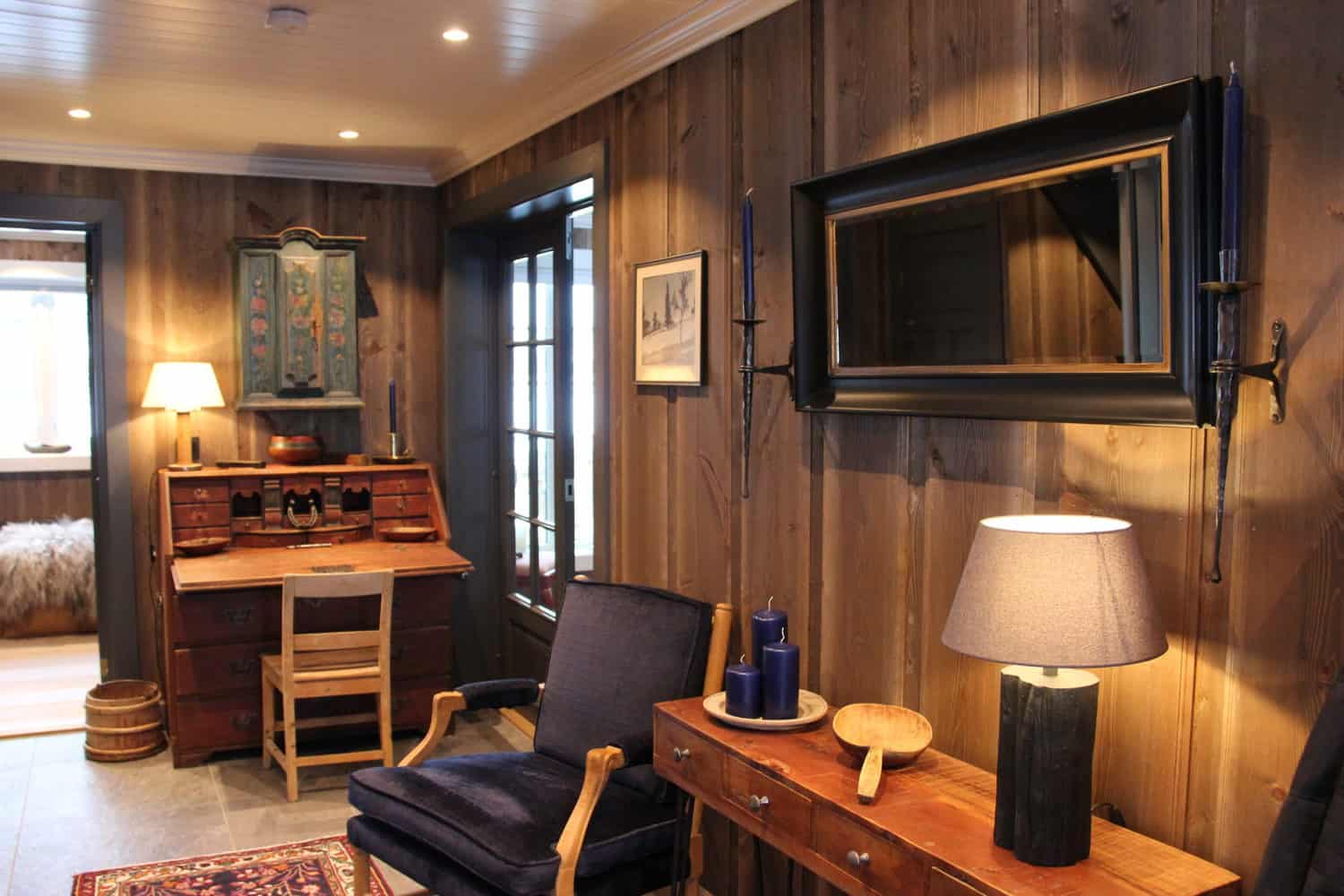 Stained Skjåk panel in the hallway with beautiful combinations of old and new.

Exterior cladding is stained in the color Seterbrun on the timber panel. They were looking for an exterior style, with solid construction. Ash is a consistent color they have chosen to use on doors and moldings, in order to run a well-executed style throughout the cabin. 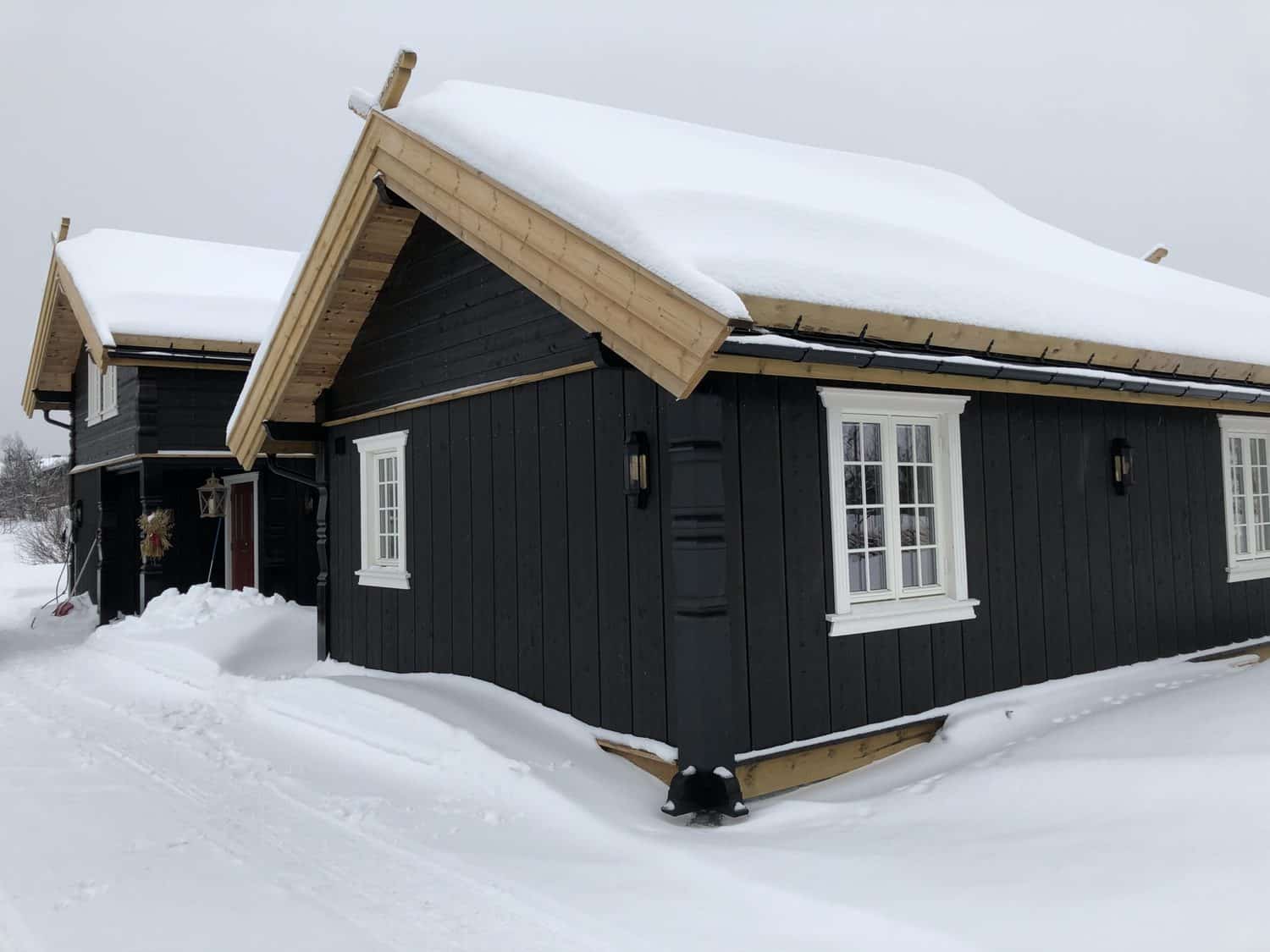 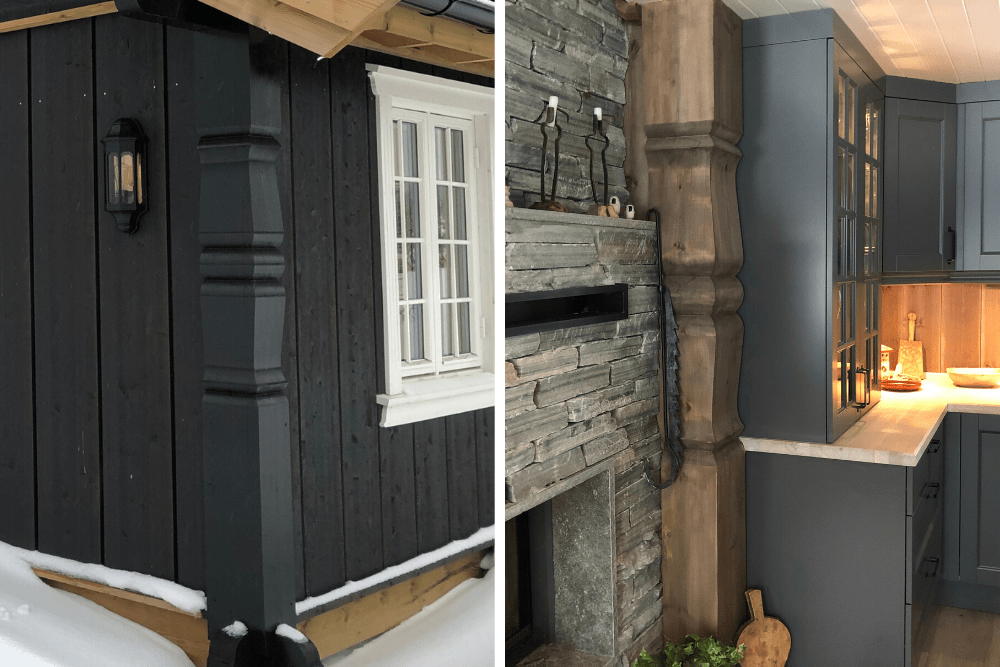 The exterior corner structure was taken up again in the kitchen and stained in the same color as the wall. 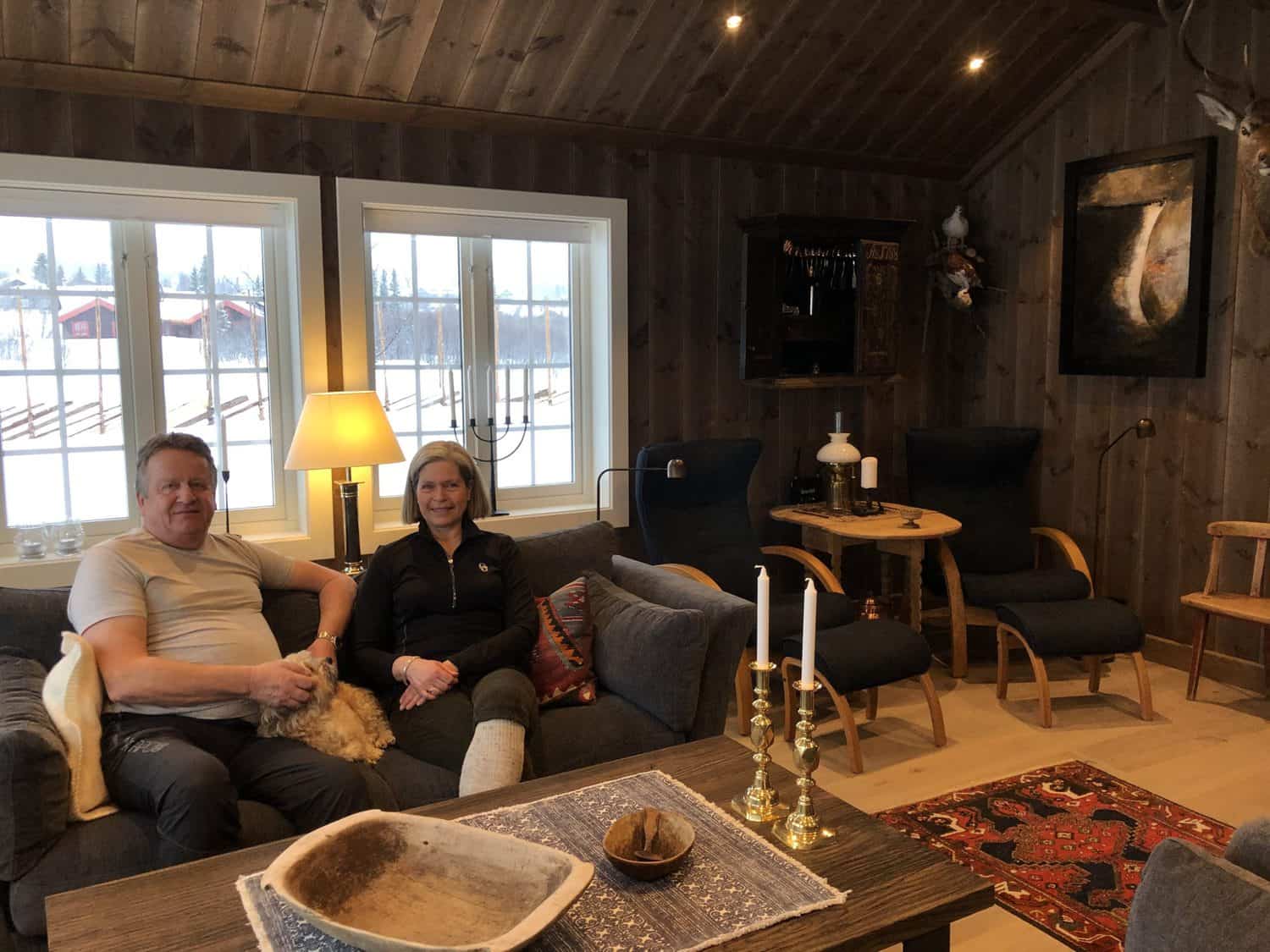 The cabin is large in size, yet it feels both warm and cozy with good color choices and nice rooms. If you want to take a closer look at more pictures, and what dimensions are used in this cabin, take a look here.

This website uses cookies to improve your experience while you navigate through the website. Out of these cookies, the cookies that are categorized as necessary are stored on your browser as they are essential for the working of basic functionalities of the website. We also use third-party cookies that help us analyze and understand how you use this website. These cookies will be stored in your browser only with your consent. You also have the option to opt-out of these cookies. But opting out of some of these cookies may have an effect on your browsing experience.
Necessary Always Enabled
Necessary cookies are absolutely essential for the website to function properly. This category only includes cookies that ensures basic functionalities and security features of the website. These cookies do not store any personal information.
Non-necessary
Any cookies that may not be particularly necessary for the website to function and is used specifically to collect user personal data via analytics, ads, other embedded contents are termed as non-necessary cookies. It is mandatory to procure user consent prior to running these cookies on your website.
SAVE & ACCEPT
Go to Top